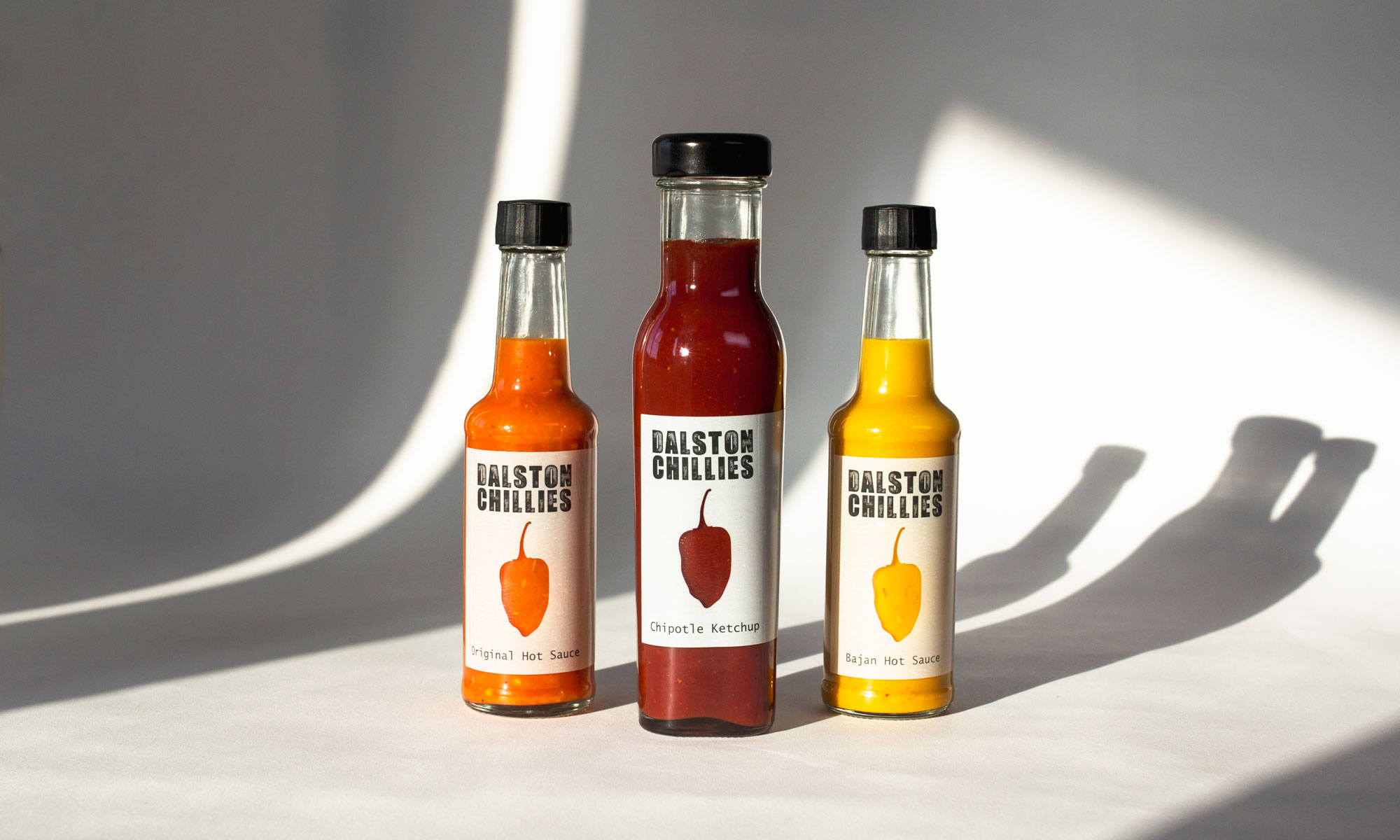 If you haven't heard of Dalston Chillies then there is a scotch bonnet shaped hole in your life. What started as a hobby juggled in between a career in graphic design and late night love of DJ'ing, has now turned into a full time enterprise and business is booming. We chat to Ben Kulchstein, the man behind East London's most fiery sauce about his favourite loves; music, food and of course chillies!

So Ben, tell us a bit about yourself, where do you come from and how did you come to live in East London?

I was born in Suffolk but moved to London at the start of 1992, just before my 13th birthday. I've lived in Hackney since then, in Lower Clapton for 14 years and Dalston for the last 11. I've been here for the majority of my life and feel like a Londoner.

How did the idea for Dalston Chillies come about?

Sort of by accident really. I'm a vegetarian so you have to get a bit more creative with your cooking to keep it interesting. I used to make what is now my Original Hot Sauce for myself. Friends tried it and asked for some, then their friends asked for some and I went from making a couple of bottles at a time to 10 or 20 bottles at a time.

I've been DJing for years and friends would see my name on a flyer and hit me up asking me to bring sauces along with me, so I'd be selling bottles out of my record bag while I was playing.

Then in 2011 a friend told me to enter it into the amateur hot sauce competition at the Fiery Foods Festival down in Brighton, it got 2nd place out of around 50 entries and it went from there really.

How long does it take you to work on a sauce recipe before it comes out?

With the Original Hot, that was a bit of an organic process, I wasn't trying to make a sauce to sell so I was probably making it for 5-6 years before I ever sold a bottle.

The Chipotle Ketchup went through loads of recipes before I was happy with it. That was probably around 8 months of work but I still had a day job at the time too. Then the Bajan took maybe a year on and off, playing around and trying to source ingredients at a decent price. I was lucky with that one though because I was doing the sauces full time by then, I got it down to 2 slightly different recipes that I couldn't decide between so I did a couple of in-store tastings to get public opinion. 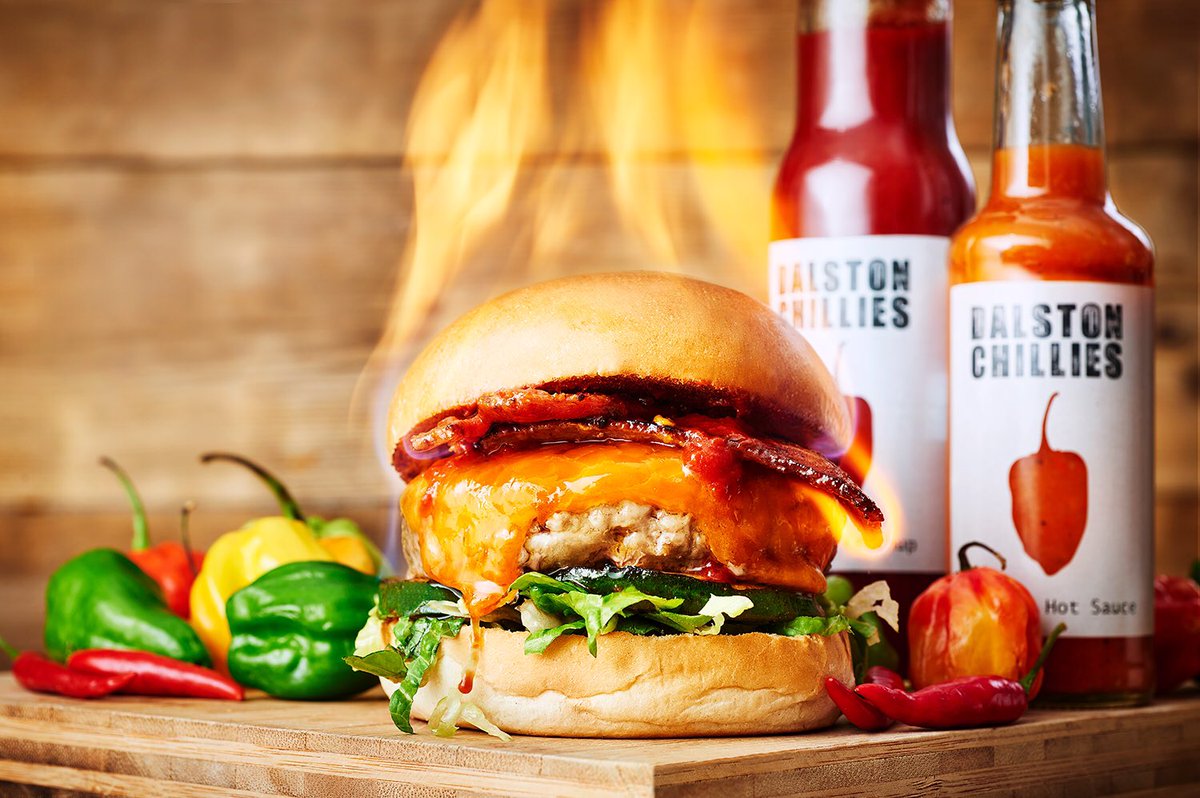 We are especially big fans of the Chipotle Chilli Ketchup and eat it with just about everything! What would you say goes best with your sauces?

The Original Hot is pretty hot as a dipping sauce, so I tend to mix it with some mayo or natural yoghurt if I want it as a dip. It goes really well in home made coleslaw or in a marinade.

The Chipotle Ketchup does go with just about everything, it's excellent with chips, pizza crusts, burgers and other junk food basically!

The Bajan goes really well as a marinade for fish or chicken on the BBQ, but surprisingly, it's also amazing with strong cheeses. Try some on a cracker with some Stilton, or put some with a Mac & Cheese.

Where do you source your ingredients from?

My chillies come in from Uganda for the Original Hot and Bajan sauces, and from Mexico for the Chipotle Ketchup. The fresh turmeric root comes in from India and then other bits and bobs are generally British. I go over to New Spitalfileds Market on the edge of the marshes for the fresh stuff a couple of times a week.

Have you ever done the scotch bonnet challenge?

I've eaten loads of them raw! I reckon I eat a raw one every few weeks at the market when I pick them up even. If it's the start of a new batch I need to make sure the heat level and that trademark musky sweetness is there. They're grown in 6-8 week cycles so that's a lot of tasting that has to be done.

East London seems to cultivate creativity and entrepreneurship, do you think living and working in this environment helped encourage you to start your own business?

It definitely made it easier for the sauces to gain some traction early on. I first started to push it in 2012 when the whole street food thing was really kicking off and we had a few friends in the area doing various projects so left bottles with them to gauge public reaction. Through them we met a few people in the restaurant business and handing sauces out to a few of them got me my first proper placement. I was in restaurants before I was even in shops.

With things like Street Feast happening around the start of the 2010's there was so much exciting food stuff going on in and around Hackney that I really was in the right place at the right time.

We love a wander round the East London foodie markets, which is where we first came across Dalston Chillies. What’s the dynamic like with the other traders? Are you all friends? Do you ever go for a pint together?

I don't really do the markets myself very often, I'm a 1 man business so I end up working far too many hours most weeks. There is a brilliant community around the markets though and with the small scale producers in general and there's a dozen or so who I speak to regularly, weekly in some cases. Then there's a few producers around Dalston who I see a lot, I was even DJing with the master brewer from 40ft Brewery for the Hackney Carnival a week or so back. The sound system we were playing on belonged to a guy called Them, who runs Cold & Blac, another Dalston based business making delicious organic coffee liqueur. 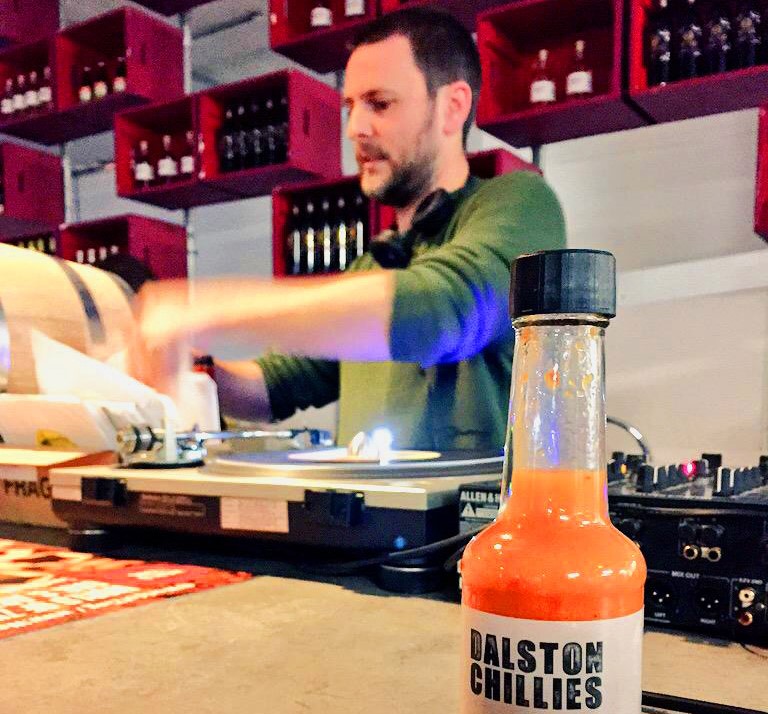 We hear your musical skills are as good as your culinary skills, do you still DJ?

Bits and pieces when I can fit it in, not anywhere near as often as I used to. 5am market runs to buy chillies don't sit too well with late nights playing records unfortunately. I'll still play every couple of months but the chilies have taken over! Keep an eye out for Dalston Chillies Records though. Release number one should be available early next year.

Do you think you’ll always live in East London and if so, where and what would your dream home be? Or perhaps you are already in it?

I always said if I didn't live in London I wouldn't be living in the UK, I think this is probably still true. I saw an amazing house on Navarino Road in between Hackney Central and Dalston a couple of years back. It was the lottery win house! It was sold as a 4 bed townhouse, with the basement converted to a 2 bed flat and had a fully gas and water plumbed outhouse in the garden that would've been perfect for making sauces.

And finally, describe to us your perfect weekend in East London, where would go, what would see and most importantly, where and what would you eat?!

We're in great spot where we are with loads going on around us. We regularly walk from ours, across London fields and Broadway Market, then to Columbia Road and on to Brick Lane or Spitalfields. It's a good couple of hours round trip with loads to see. Alternatively, there's the canal walk down to Victoria Park too.

As for eating, I'm a sucker for Andina in Shoreditch, Peruvian food and just bags of flavour. Rotorino on Kingsland Road is excellent for Italian food and Chick'n'Sours does the best starters around (for us chicken free veggies!) I've been told the chicken is excellent too.

I'm also excited to see Mildred's has just popped up at the back of Dalston Junction station so that's next on the list.

You will find Ben's awesome sauces in a number of East London pubs and restaurants as well as to buy directly in The Albion, The De Beauvoir Deli and Sourced Market amongst others, and online at Craved London

You may also spot a bottle of Chipotle Chilli Sauce in a home near you will also fin them in our East End hampers.